Here, we find the original facilities of BATIPA LIVESTOCK where the first dairy farms practices began in PENINSULA BATIPA, under the silent presence of two majestic trees: the Higueron (Ficus sp) and the Corotu (Enterolobium cyclocarpum). Under their canopies there are ancient monoliths suggesting that this site might have been used as a ceremonial site, by the indigenous people who inhabited these lands. 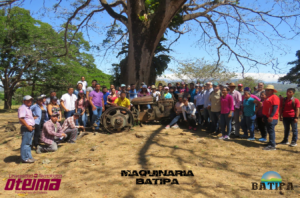 From here on, we leave the livestock area and proceed toward the teak reforestation plots. This project is supported by Desarrollos Agro Forestales de BATIPA S.A. (DABSA), company that sowed an approximate area of ​​1300Ha. in the peninsula. The reforestation project was established in an area of Batipa to 200 meters above sea level. At this altitude there is a wildlife reserve that connects to the mangroves through a network of biological corridors allowing wildlife mobility in complete freedom, from the forests to the coast. This protected area is known as “Private Reserve of CERRO BATIPA Wildlife “.